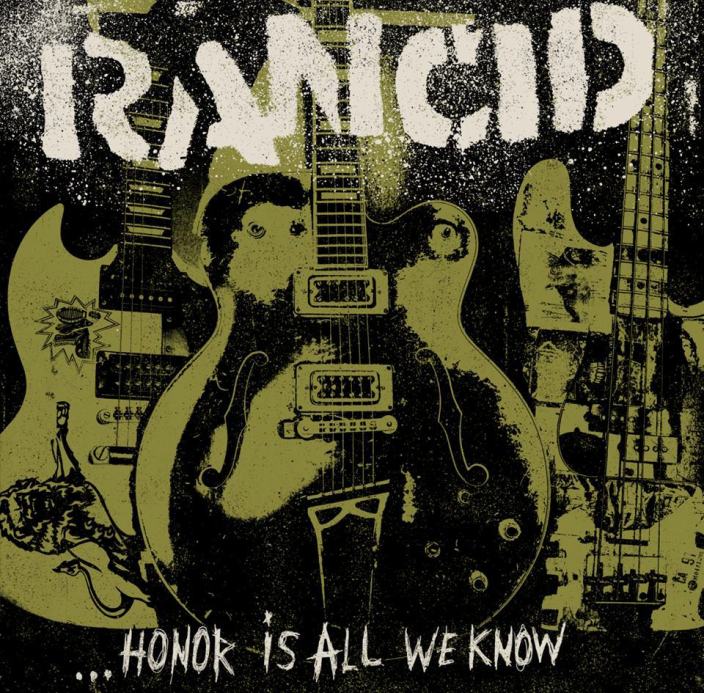 “I’ve been gone for way too long”, sings Tim Armstrong on opening track of the latest Rancid album, Honor Is All We Know. Five years has in fact proved a long time for Rancid fans to wait for new material. But now, the East Bay punks have returned armed with fourteen short, sharp punk rock tracks; the longest, “Diabolical”, clocks in at a mere 3 minutes 12 seconds.

Musically, Honor Is All We Know feels like a trip back to the Rancid of the nineties/early 00’s. The heavily reggae inspired “Evil’s My Friend” sounds like it could have easily been taken from 1998’s Life Won’t Wait whilst “Already Dead” is reminiscent of 2003’s “ Indestructible” from the album of the same name. Yet whilst the sound may have remained similar, Armstrong and crew are still pushing themselves to progress twenty years into their musical careers. Honor Is All We Know is by no means a re-hash of old material. The changes are subtle, not a move away from, ehem, “all they know”.

This move forward can be seen largely in the latest vocal performances. Title track “Honor is All We know” sees all three vocalists, Armstrong, Lars Friedrickson and Matt Freeman, take turns with the microphone as soloists, before blending their unique voices harmoniously in the chorus. Realising that Brett Gurewitz of the archetypal harmonious punk band, Bad Religion, acted as producer on this album goes some way to explaining this glorious new element to the tracks.

Vocally then, this album sees Rancid on top form. Freeman’s voice should be taken particular note of; the perfect combination of melody and grit. The songs he has had a solo vocal role for could be counted on one hand, but they are some of Rancid’s best (“Black Derby Jacket” anyone?). His sections of “Honor is All We Know” are a real treat and a worthy addition to this short but wondrous list.

While musically and vocally Honor was worth the six year wait, it falls short lyrically. Tracks like “Grave Digger” become repetitive as Armstrong repeats the refrain, “Grave Digger, Digging the way down/Digging the way down to the underground”. Reaching the level of 1994’s And Out Come The Wolves was always to be a tough battle on the lyric front. At times it seems that lyrics regrettably become somewhat of an afterthought. However, it is the sentiment is remains. It is the urge to “Raise A Fist” as the track title suggests, that is important on Honor.

Armstrong sings, “I’ve been gone for way too long and now I’m back where I belong”. Five years has been a long time but it has been worth the wait. Tim, we can only agree that this is where Rancid belong.