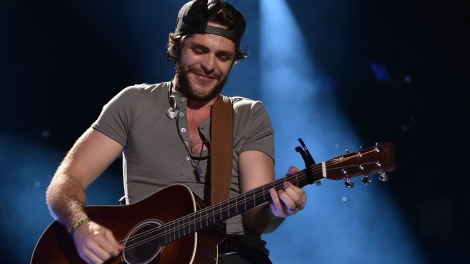 American country music singer and songwriter Thomas Rhett (Thomas Rhett Akins, Jr.) opened his European tour in Mandela Hall, in a gig opened by his own father – the legendary Rhett Akins. We had the wonderful opportunity to talk to Rhett (Jr.) all about his experiences as a performer.

What are you most looking forward to seeing during your UK and Ireland tour?

I just love travelling in general and getting to experience new places and cultures and meet new people. We’re getting to hit a couple of places I have never been to before, like Belfast and Manchester, so I am really looking forward to that. And most of all, we’re getting to come and play for fans that bought tickets specifically to see us, so I am beyond excited to get to meet these people that have supported my career from thousands of miles away.

What inspired you to write “Die a Happy Man”?

My wife was kind of teasing me about not writing that many love songs, joking that she wished I’d write a song for her like “Just To See You Smile” by Tim McGraw. So one day, on a bud in Arkansas, I sat down with a couple of songwriters named Sean Douglas and Joe London and we just started talking about that and talking about our relationships and what the women in our lives mean to us, and this song came out of that. It’s really autobiographical about mine and Lauren’s relationship, so it’s a really special song for both of us.

You have recently been nominated for several awards. What does it feel like to be recognised in this way?

It’s really humbling to be recognized at any awards show, whether it’s fan voted or industry voted. It is tough to measure how you are doing sometimes when you are on a bus all year…so to get to sit back at the end of the year and have someone say “hey, we think your song is one of the top 5 songs from the past 12 months” is kind of a nice piece of validation that all the hard work is paying off and people really are responding to what you do.

Who were your main musical inspirations when you were growing up?

My musical upbringing was very much a mixed tape. My dad listened to everything, so I grew up the same way listening to the Rolling Stones one minute and DMX the next…And obviously I was educated on old school country like Merle Haggard and Hank Williams senior.

What are your plans for the upcoming year?

2017 is a really big year for us. We just announced our first full headlining tour in the US, so it will be the first time in my career that I have really got to go out and play a tour to MY fan base…Beyond that, we’ll be recording again and hoping to put out a new album at some point next year.

Now to test you on some good old Northern Irish slang – what does the word “craic” mean?!

I think that means fun or a good time, right? It was a good craic. I think I heard someone say that last time I was over.

Have you ever had an Ulster fry?

Not yet. But I am going to google that right now.