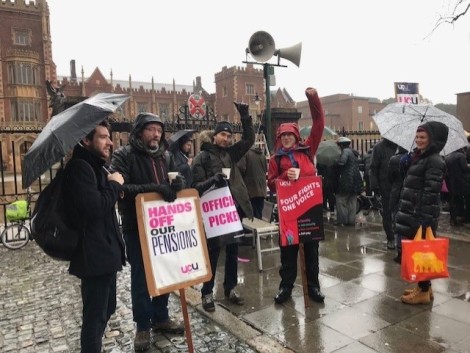 We are now mid-way through eight days of strike action taking place in 60 universities throughout the UK. Industrial action began on Monday 25 November and is scheduled to last until Wednesday 4 December, affecting over one million students. From Thursday 5th December, strike action will continue with many academics working to ‘action short of strike’, meaning they will not reschedule cancelled classes or cover for absent colleagues.

The University and College Union (UCU) which represents over 120,000 academics, lecturers, administrators, librarians and researchers in higher education institutions across the UK, called for strike action following ballots which saw UCU members vote on two separate issues. According to UCU figures, the first ballot, regarding proposed changes to pensions, saw 79% of polled members supporting strike action; the second, concerning pay and working conditions including equality and casualisation, reported a rate of 74% in favour of industrial action. Connor Veighey, President of Queen’s Student Union, said: “It is unacceptable that there has been a failure to reach fair agreements on pay, working conditions, inequality and pensions. It is vital that staff and students stand together to reject an education system that saddles with decades of debt, while degrading staff working pay and conditions.”

The dispute over pensions relates to proposed changes to end the defined benefit element of the Universities Superannuation Scheme (USS) by Universities UK (UUK), a group of university vice-chancellors and principals representing 136 universities. These proposals would see the average lecturer almost £200,000 worse off over the course of their retirement, according to UCU estimates, and resulted in staff at 61 universities striking for 14 days across February and March of 2018. These real-term staff pay cuts are at odds with a survey conducted by the Office for Students (OfS), which disclosed that nearly half of all university Vice Chancellors receive over £300,000 annually, excluding benefits such as accommodation and pension contributions, a figure which has been rising steadily.

The ballot concerning working conditions is in response to growing levels of dissatisfaction in the higher education sector, with staff citing job security, unfair workloads, and unequal pay among their main concerns. According to the Higher Education Statistics Agency (HESA) figures, 54% of all academic staff and 49% of all academic teaching staff are on insecure contracts, meaning they are forced to deliver high quality teaching under the constant threat of unemployment and underpayment; at Queen’s, 67.8% of staff are on precarious contracts, ranking at 22nd worst out of the 50 Universities that released figures.

Despite the introduction of equal pay legislation 40 years ago, research conducted by the Times Higher Education highlighted a gender pay gap of 15.1%, while the ethnic pay gap is even worse; black and minority ethnic (BAME) staff at the 24 Russell Group Universities (including Queen’s) earn 26% less than their white counterparts. UCU head of equality, Helen Carr, said: “It is absolutely unacceptable that BAME staff continue to be paid less and are under-represented at higher levels within our universities. Institutions must make it a priority to address the concerns of BAME staff and work with trade unions to tackle the barriers to progression they continue to face.”

The General Secretary of the UCU, Dr Jo Grady, said of the industrial action: “As a former lecturer, I know that the decision to disrupt students’ learning is never an easy one. But members know that issues at stake in these disputes have a material impact on the quality of education they are able to deliver. Students know it too, and we’re delighted that the National Union of Students will stand with us in our fights for fair pay and pensions.”

Queen’s Student Union voted last week to support the strikes and have been a daily presence at picket lines. Students are encouraged to support striking staff, and ‘digital picket lines’ have been established on departmental social media channels, with many refusing to post about work during the strike action.

The Vice-Chancellor’s office did not respond to the Gown’s request for comment. 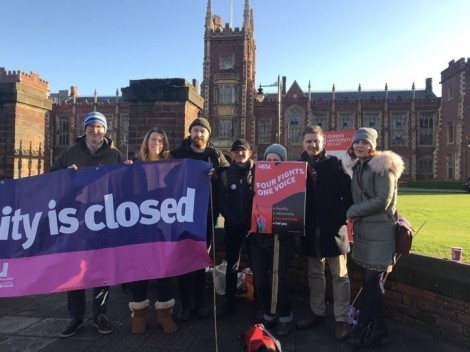