News of soul great Bill Withers’ death broke on Thursday 3rd April, after he passed away in California at the age of 81 following heart complications.

Coming to the soul music scene in his thirties, Bill Withers would take his songwriting inspiration from his own experiences. This inspiration came primarily from his remote upbringing in the West Virginian coal-mining town of Slab Fork. His experiences as an African-American would loom large throughout his work. He became a five-time Grammy star, setting a precedent in 1988 which would take almost 25 years to break.

He instantly became of age through the release of his 1971 debut album Just As I Am and its successor Still Bill on the Sussex record label. They were genre-defining and became bedrocks on which soul music flourished, as much in 1971 as today in 2020.

He navigated his way through the rough world of hard-knocks and kickbacks before arriving into the music scene. He started out showcasing his work in the small backrooms of Los Angeles’ music venues and clubs. Having faced record aloof label executives, he was unfazed their attitude. After all, he had hastily learned the hard facts of life having spent the best part of a decade in the US Navy and subsequently as an assembler with the Ford Motor Company and Lockheed aviation; he was well able to handle himself.

This was no less accurate when he turned his hand to the craft of songwriting. Musicians such as Al Green and Bobby Womack had already made their mark as soul singer-songwriters. Bill Withers tallies high amongst this collective of 1970’s ‘rootsy’ soul prodigies. Music critic Derek Miller dubbed 1972’s ‘Still Bill’ a “stone-cold, gold plated soul classic,” which “stands tall next to monolithic classics like [Al Green’s] Call Me, [Curtis Mayfield] Roots, [Isaac Hayes’] Hot Buttered Soul, and [Stevie Wonder] Talking Book.”

Withers’ ‘Kissing My Love’ has stark parallels with The Meters’ jam ‘Just Kissed My Baby’; this generation of albums did not land on the shelves of record stores in a vacuum – there was a sense of togetherness which somehow still managed for these soul artists to forge a distinct identity.

The musicianship of the Watts 103rd Street Rhythm Band on the aforementioned 1972 album, themselves acclaimed for their own signature tune ‘Express Yourself,’ complemented Withers’ more modest approach. ‘Use Me’ demonstrates Withers’ contribution to the growth of funk music, its irresistible hook coupled with the breakbeat underbelly, powering the track throughout. It is no surprise that this emerged scarcely one year before his collaboration with Booker T. Jones along with the folk and country guitarist Stephen Stills, who provided guitar on the million-seller ‘Ain’t No Sunshine’ from his debut album. The track itself has a poignancy of loss underpinned by the stringed cadence at the track’s ending. 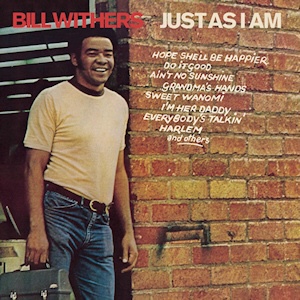 The involvement of Stephen Stills is intriguing. Forming his own supergroup with Crosby, Stills, Nash and Young, Stills was instrumental as a leader in the Woodstock-inspired folk movement during the late 1960s. Withers, therefore contributed to this movement, showcasing his effortless ability to collaborate across the spectrum – genre was nothing more than an insignificant boundary.

The lyrical perceptiveness of Withers’ work was fundamental to his success. Hits from his 1972 10-track album, such as ‘Lean on Me’, have become staple listening for solitary moods and carry messages of strength for those going through the darkness of depression: “I’ll share your load if you just call me.” He himself struggled to adapt to the bustling life of the city when relocating to Los Angeles in the late-1960s, initially feeling isolated from its culture.

Bill Withers’ ingenuity both as a songwriter and a poet were a true reflection of the times; the simplicity of his laid-back acoustic strumming along with his rich tonic baritone vocal quality is what made him such a pioneering figure. Despite the candid style of his work, Bill Withers left his productions with a shining veneer of excellence.

The 1972 release of ‘Lean on Me’ crowned no. 1 on the then R&B album chart. It emerged at the conclusion of the Civil Rights Movement and occupied centre-stage as the rallying anthem which signified that there were new terrains of change on which the African-American community to tread.

Its lyrics demonstrate an enduring humanity: “Brother call me, when you need a hand”. It still rings true today with the current coronavirus pandemic and people across the world uniting to fight an invisible, but fatal enemy. ‘Lonely Town, Lonely Street’ of 1972’s Still Bill have a great significance with an eerily powerful resonance today.

Withers also contributed his own protest song ‘I Can’t Write Left-Handed’, which hears the ruminations of an older man on the futility of Vietnam War and its effect on the youth of America. In the 1960’s the sound of the more folk-inspired soul artists, such as Withers, still complemented the pop-soul sound which was emerging from Detroit with the enigmatic Motown label, which brought soul music to a more diverse audience and consumer base.

On Twitter, John Legend said that his singing of ‘I Can’t Write Left Handed,’ was “the first time” he shed a tear while “cutting a vocal.”

‘Grandma’s Hands’ showcases Withers’ signature sentimentality in all of two minutes. It’s a touching ode to his own grandmother Lula to whom he had a great attachment. She acted as both matriarch and patriarch in Withers’ young life, following his father’s sudden death. The enduring symbolism of the hands is a personal trigger for a young Withers. The ‘hands’ of his grandmother had come through the misery of slavery and the ensuing American Civil War. It is a typical portrait of an African-American lady with an inherent religious devotion which is echoed by the southern-tinged gospel timbre, coupled by the thin country harmonica permeating its base.

“But I don’t have grandma anymore / if I get to heaven I’ll look for grandma’s hands.”

This is truly a ground-breaking work of art and it has been covered by everyone from Willie Nelson to Mavis Staples via Ray Charles and Gregory Porter. His track ‘Let Me in Your Life’ was penned by Aretha Franklin as the title track of her 1974 album on Atlantic Records. Michael Jackson’s youthful take on ‘Ain’t No Sunshine’ was recorded less than six months subsequent to the release of Wither’s original.

The multitude of covers from Withers’ extraordinary body of work owes much to the sobriety and unpretentiousness of his musical personality. This was perhaps most aptly reflected by his own words in ‘Do It Good’ from his debut album: “If you’ve read the album cover by now, you know my name is what my name is.” It is an adroit piece of comic rhetoric, but it goes deeper in exemplifying his ‘what you see is what you get’ persona.

As the decade progressed, Lovely Day emerged in 1977, occupying seventh position on the UK’s album charts for several weeks. It is a pleasantly buoyant cut of crossover soul with notable disco influences, which at the time was a truly epic force in the music industry. Withers could not help but set records and ‘Lovely Day’ features his literally breath-taking, sustained 18-second-long end note. It also featured a then little-known Ray Parker Jr on guitar. The song will forever be the soundtrack of a long, hot summers.

1985 was the year of finale for Withers’ career. The release of his final album punctuated his voluntary retreat into early retirement, after which he was rarely seen in the public eye. A notable exception included his appearance, alongside John Legend and Stevie Wonder, in 2015 at the ceremony which celebrated his induction into the Rock & Roll Hall of Fame.

In his latter years he was increasingly reluctant to conduct interviews with journalists. He continued to be seen working at the garden of his Los Angeles home.

The most recent and extensive rendition of Bill Withers’ catalogue emerged in 2018 following the endeavours of jazz vocalist José James and the LA-based Blue Note Records.

Bill Withers’ death comes at a time when some of the greats of the music world have left us, including country singers Kenny Rogers and Joe Diffie.

Bill Withers is survived by his widow and his two children.

Bill Withers performing live at the BBC in 1973.